Gerhard Delport runs a company called FFF Safaris which he markets as a ‘Premier Safari Company specializing in Ethical Walks and Stalk Huntin, Fly Fishing and Birding excursions in and around Dullstroom’. He also offers Historical Tours which concentrates on Battlefields of the Escarpment.

I was introduced to Gerhard through a long-time acquaintance and Tour Guide, Marion Moir. Through my medal collecting hobby and interest in battlefields, I have been in regular contact with Marion and in fact have been on Tour with her to many of the battle-sites in Mpumalanga. Now that I have started a Tourism Company and want to take tourists to the Kruger National Park, I decided to contact Gerhard in order to do a refresh on the Battle of Bergendal and the area as on route to the Kruger Park my tour will pass the battle-site and it will be an ‘added value’ stopover.

In discussions with Gerhard we agreed that if we started early enough, and because of my knowledge and previous experience, we could complete the tour in one day.

The tour was a one-day tour and joining us on the tour was Celeste Combrink.

We started off by visiting the Museum in Dullstroom.

This was an excellent start to the tour as the museum is a map that dates back to the early 1900s and gives a representation of the farms, their names and their relevance in the battles fought in the area during the South African War.

There were also a number of books ‘on display’ which were of huge interest as they related to events and personalities of the war. 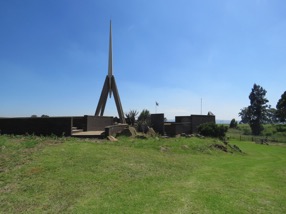 Monument to the Battle of Bergendal

The main focus area for me was the Battle of Bergendal which was the last set-piece battle of the Anglo-Boer War 1899-1902 (now known as The South African War) and took place on 28th August 1900.

I have a medal in my collection to Private W.J. Park of the Rifle Brigade who was killed in this battle and his name appears as a casualty on a memorial at Bergendal.

Of specific interest to me on this visit to Bergendal was the position of the Boer Long Tom Guns, and where the Boer Headquarters were from where the battle was directed. The Tours that I am going to conduct are going to start in the Ladysmith area where we will be doing 100% battle experiences, and the leg of the tour, in Mpumalanga, will be concentrating more on ‘Tourist Experiences’ – I have enclosed an Itinerary – Appendix 2A, which when I have completed the costing, will appear on my website – www.battletoursza.com. I, therefore, need to know where guns were placed, the names of Regiments and Commandos who took part in the battle, and from where operations were directed. 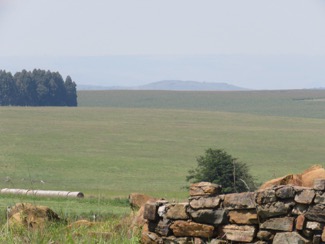 The hill is called Elands Kop. The hill in the background is the position on which the left-most Long Tom Gun of the Boers was positioned during the Battle of Bergendal.

When we had completed our visit to Bergendal, we proceeded down the N4 to the Dalmanutha turn off to visit the site where the Boers had their Headquarters.  We walked around the ‘site’ and Gerhard told me an interesting story of how Boer General Viljoen’s wagon was burnt in a veld fire and that he lost all his possessions including his diary. I mentioned that I had Viljoen’s Biography of the Boer War and would look it up as it is an interesting anecdote for tourists. 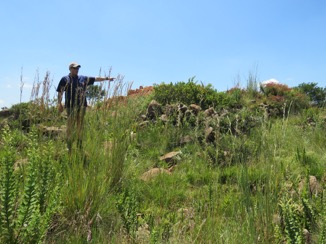 The position of the Boer Headquarters for the Battle of Bergendal. This is where Ben Viljoen’s wagon was burnt in a veld fire.

Although it was off the route that I am going to follow with my tour group, I asked Gerhard if we could try and find the graves of the soldiers killed at Dalmanutha when the Boers attacked the railway station there on 7th January 1901. The attack on this station took place on the same night as the Battle of Belfast and was really a minor skirmish.  Gerhard had never been to the site and I couldn’t remember where it was from my earlier visit with Marion, so after searching for half an hour and a brief stop we aborted the search.

We then proceeded to the site of the Battle of Vlakfontein which was fought over a couple of days early in July 1901. The reason why I wanted to visit this battle-site is that I had not been there before – probably because it is ‘off the beaten track’. The battle-site is certainly not a commercial site in that there are no monuments, no graves, and no indications of the presence of soldiers, in the form of sangars. 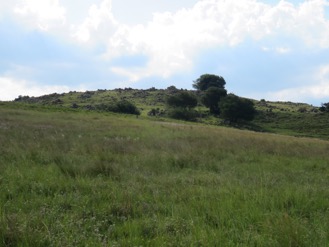 The site of the Battle of Vlakfontein

It was an interesting interaction with Gerhard as he gave his description of what he thought happened as opposed to what is in the public domain – Military History Society report dated December 1994, and other reports.  Gerhard is an ex-military man and gave his theories on ‘line of sight’ for artillery saying that it would have been impossible for guns to have been positioned in certain positions if soldiers were supposedly in ‘reported positions’. This made the visit to Vlakfontein, although not part of my proposed itinerary, all the more interesting.

Our next stop was the highest ‘point’ in the area – Mares Kop. I had never heard of Mares Kop before and Gerhard gave a great description of the strategic importance of the position. Once there I could understand and appreciate the significance of his description.  From Mares Kop, one can see Machadadorp and Waterval Boven quite clearly.  Also, any troop movement from Belfast and Lydenburg would be spotted almost as soon as these troops left those towns.  It is no wonder the Boers used this position to their strategic advantage. Similarly, when the British started their ‘sweep’ of the area, to try and corner and surround the Boers in April 1901, it comes as no surprise that Viljoen used Mares Kop to plan his movements in order to avoid being captured. 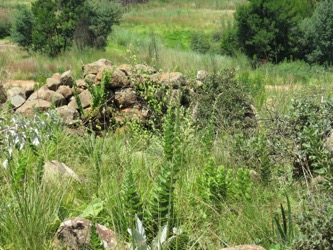 Boer sangaars at the top of Mares Kop. This was where the Boers camped when they were observing the movements of the British in their area. 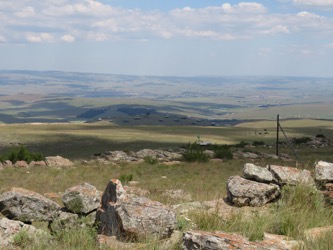 A view from the top of Mares Kop, the highest point in the area.

On our way back to Dullstroom we went past a farm where the last shots of the Battle of Bergendal were fired – Pannetjies.

There is nothing really there and although it was interesting to learn about this farm, it is probably not something I would use in the future.  Before heading to Dullstroom, we went to Monument Hill on the outskirts of Belfast. When I did my tour with Marion, she mentioned to me that the monument on the hill, which was erected to commemorate the Boer victory over Mapoch in 1883, was used by both the Boer and The British as a beacon to co-ordinate artillery fire on targets in the area. Gerhard was not aware of this and we both undertook to verify this story. The original monument was destroyed by artillery fire during the war and was rebuilt in 1906.

The cemetery just outside of the town of Dullstroom, on the road to Lydenburg, was next on our itinerary. This cemetery contains the graves of the soldiers killed at the Battle of Palmietfontein fought on 16th April 1901. There is a fortification on top of the hill above the cemetery and there are two flag poles on this fort where sometimes the British and the old Vierkleur flags are flown.  We finally returned to the Dullstroom Inn for a well-earned beer.

I stayed over at the Dullstroom Inn, and being in the area I made my way to Elandspruit the following morning. The Battle of Elandspruit was fought on 19th December 1901 and the graves of those who fell are on opposite sides of the road to Lydenburg, about 18 km outside of Dullstroom.

I have stopped at this site many times and will be stopping here when I conduct my tours on the return trip from Kruger Park to Johannesburg.

Again, being so close, I visited the site of the Battle of Helvetia which was fought on 29th December 1900. This was a surprise attack on a major British position by Ben Viljoen and the British were still suffering the after-effects of Christmas parties.  It is said that half the prisoners taken by the Boers could hardly walk. Also, the major British artillery piece, the Lady Roberts, a naval gun, was taken by the Boers. The main purpose of my visit there was to make sure that access was still available to the cemetery on Middle Hill – which it is.  What is left of the old Helvetia Trading Centre is now covered by trees as it is on Sappi land.  However, I do have photographs of the ruins, taken in 2001, which show what was there at the time of the South African War.  On the trip that I am planning, having spent some time at Bergendal, we will stopover at Helvetia for a brief description of the battle, a walk to the cemetery, and a look at the photographs I have of the ruins.  Then it is off to Kruger Park via Schoemanskloof.

The organization of the Tour was very good. Communication via both email and phone calls was clear and there was never any misunderstanding regarding what was planned.

I sent a list of places to Gerhard indicating where I wanted to go and what I wanted to see.  He made slight ‘modifications’ to my suggestions which I accepted due to his knowledge of the area and roads we would have to use.  I also said that I would like to make it a one-day tour and his changes facilitated my request.

Gerhard kept in touch with me regarding what I should expect in the way of terrain and weather. He asked about accommodation and when I said I hadn’t arranged anything he gave me two options to try. When I said I had booked into the Dullstroom Inn he arranged a special rate for me.

Documentation was not really necessary. Gerhard referred me to his website and said that if there was anything else that I needed he would provide it. He asked me if I had a map of the area – when I said I had, because of my previous trips, and experience with Marion, he was good with that.

The presentations that Gerhard gave were verbal – he had a map with him just to orientate me with the movement of the forces of both sides. Being fairly active it was easy for us to get to the various vantage points to see what he was telling us, and to ‘position’ and orientate ourselves with where we had been and where we were going.

The Dullstroom Inn was ideal for what I needed – a cold beer, a bed, a good restaurant, and a good breakfast – all at a very affordable rate. If one is looking for a 4-Star stay then they would be disappointed as there is no air-conditioning or TV in the rooms.  However, after a full day in the fresh air, walking around battle-sites, and being fairly active all day, the Dullstroom Inn was ideal for me.

At the end of the day, we spent about an hour discussing the day. It was a good way to round off a very full day.  Questions that I had forgotten to ask were answered.  A good way to wind up – rather than just a good-bye in the car.

On my way home there was the detail that I needed and some facts that I had forgotten. I sent Gerhard an email on my return with a number of questions and got an almost immediate response.