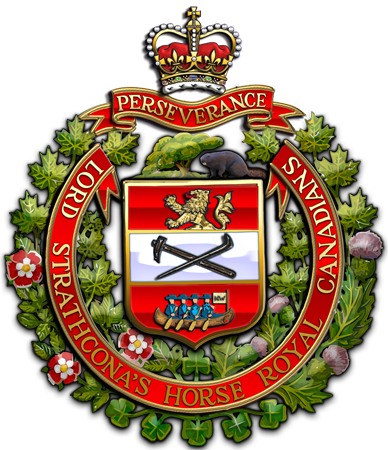 When it was obvious the war was not going to be over by Christmas 1899, the call went out to the Colonial powers for help.   Australians, New Zealanders, and Canadians volunteering to come and fight the Boers.

Lord Strathcona, offered to privately fund 500 odd men and officers, (known as ‘Rough Riders’) horses, and guns.  The men were all handpicked for their ability to ride a horse and to be able to shoot and their reputation preceded them as many a British General was keen to have them join their Battalion.

Lord Strathcona, alias Donald Smith was born in Scotland in 1820 and moved to Canada when he was 16  working for the Hudson Bay Company.  He later became Governor of the Company but is better remembered for his part in building the Canadian Pacific Railway, driving the final spike in.

The men were signed up on a 12-month contract, departing Canada March 1900 and returning February 1901.   Colonel Sam Steele of the Northwest Mounted Police was in charge and with him as his bugler was a 14-year-old, Mickey McCormack, who had to get written permission from his mother to be able to join up plus have with him proof that he could play the bugle!   He was interviewed for radio some 70 years later and to listen to the tape recording of the interview is goosebump material as one listens to this voice from the past. 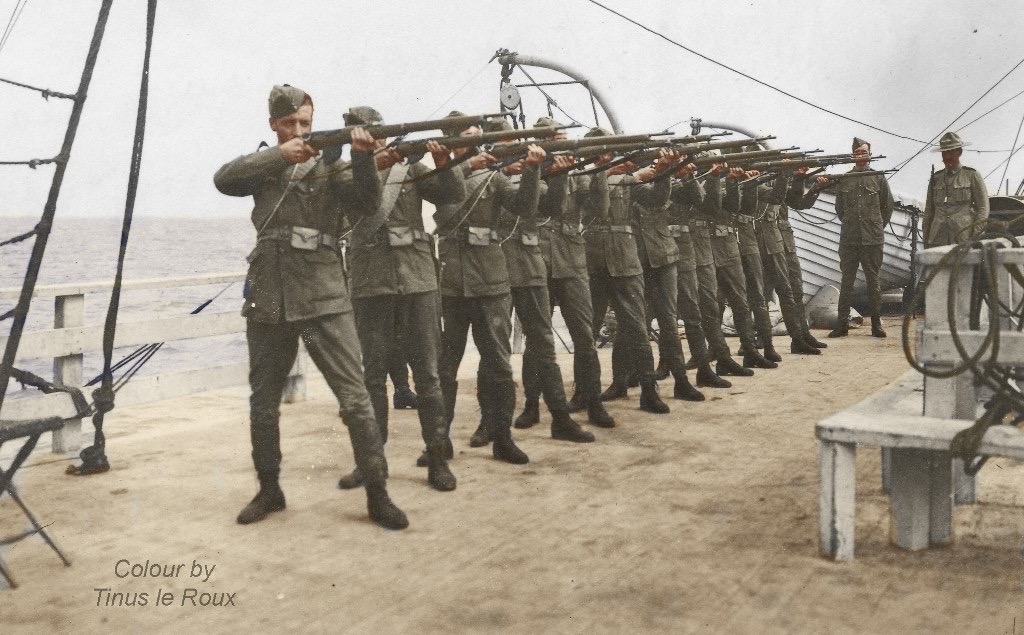 Training while on the way to South Africa

3 squadrons of Strathcona’s Horse despatched to Carolina, off the line of march, where after some fighting with about 40 armed Boers, they burned all the warlike stores left in the town & then rejoined the main column.

Buller fell back to Helvetia after having been to Weltevreden and Nooitgedacht, preparatory to marching to Lydenburg

Roberts realized the mistake in keeping 3 Generals on the Pretoria to Delagoa bay railway line and ordered Genl  Buller up north to Lydenburg and Genl French to Barberton.

Buller’s advance met with severe opposition from the enemy 2000 men who were holding a strong position at Badfontein (Wit Klip Pass) had 3 Long Toms, many Field & automatic pieces.  Buller described the position as resembling Laings Nek, so Lord Roberts agreed with him to defer his attack until I could send him assistance

Ian Hamilton despatched from Belfast to turn the right flank of Boer force in front of Buller.bBuller waits at Badfontein, doing nothing.

Hamilton enters Dullstroom – enemy fighting rearguard all the way.  Hamilton had no mounted troops so Brocklehurst sent from Buller’s column to join himBuller still waiting at Badfontein doing nothing.

The following members are buried at the British Cemetery in Badfontein.

He and his troops went out to set up a cossack outpost.  All fought until last round of both rifle and revolver ammunition was expended, refused to surrender & with his men died bravely in defense of their post.

Became entangled with a strong force of the enemy returning to camp after failing to set up cossack post 7,000 yards to the right of the bivouac.

Had no superior as a keen, brave & patriotic man, he was an only son and had come out of the Yukon, 600 miles to Skagway on the ice to join the regiment.

The graves of Sgt Logan and the rest of the men of the unit that died on the 4th of September 1900 is at the Badfontein Cemetary. 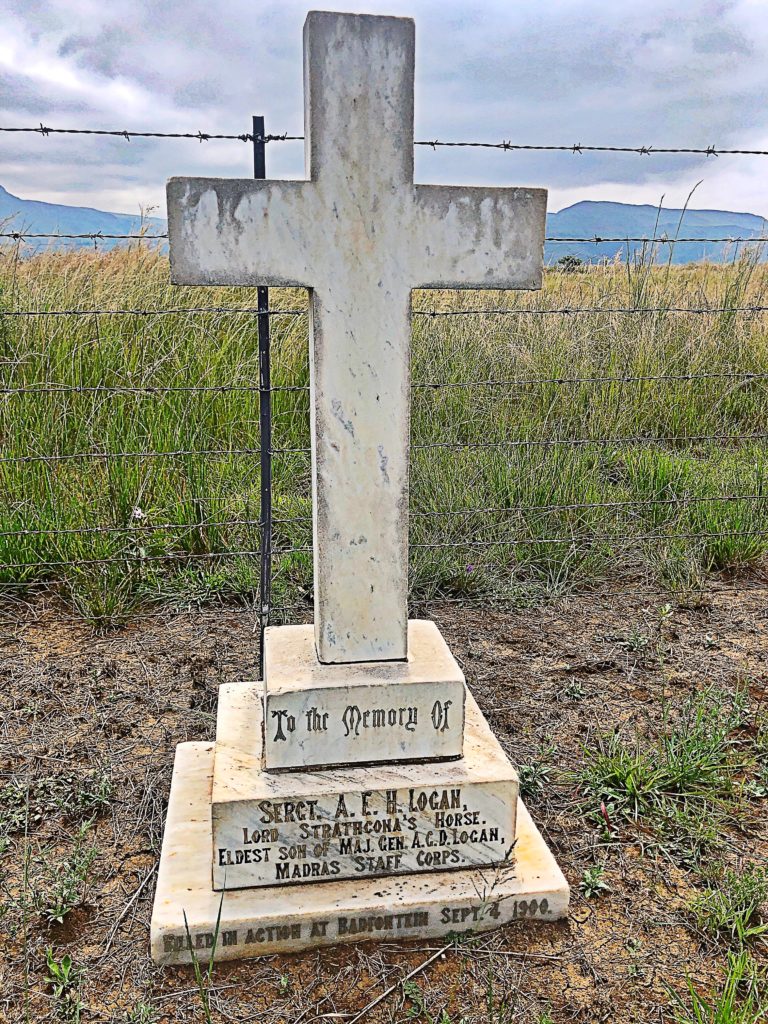 Botha opens fire on camps of 7th Brigade & artillery with a Long Tom (east).  Troops slightly withdrawn & 5” guns replied.  Boers were seen working at sangars on a hill to right nearer camp.  Buller sent Howard’s brigade –  seized the hill and was not undisturbed during the night.

Boers move back to Lydenburg due to pressure on the left and right flanks –  some to Krugers Post, but the majority with 2 Long Toms taking up a position at Paardeplaats 7 miles east of Lydenburg.

(Buller sent forward Dundonald at 11.30 to press into Lydenburg.)

Boers first sent an offensive heliograph message saying too lookout, then opened fire for the rest of the afternoon from Pardeplaatsl!

Genl Buller attacked the enemy at Paardeplaats, whence with their 6” guns, they were firing into the camp and town of Lydenburg.   Boers held rocky ridge in front of Mauchberg 5 miles southeast of Paardeplaats.

Dundonald bivouacked on the Mauchberg

Genl Botha hands over command to Gen Ben Viljoen due to illness.

President Steyn slips through to Ohrigstad.

80 burghers surrendered to Genl Buller at Spitskop. Genl  Buller, unaware of the need for haste, spent week withdrawing men from 3 posts between Lydenburg and Spitzkop and getting supplies.

Genl Buller could see dust and wagons of Botha’s column west of Pass.  Generals Viljoen & Botha separate at this stage.

Genl Botha had ZAR Govt and state treasure with him.bivouacked at Geelhoutboom

Spent getting transport up Pilgrim’s Hill (for a distance 2½ miles has an average gradient of 10°)  Guns & wagons dragged up by hand!!!!!!!

Krugers Post reached and touch with Lyd. garrison regained.  Boers who had been holding Krugers Post withdrew to Waterval Valley and so evaded our troops.  Genl Brocklehurst sent by Howard from Lyd. before GenlBullers’s arrival.

Precautions against attack defective his bivouac shelled for last time by a Long Tom and 2 other guns killing 1 officer of Devons, 1 wounded 8 casualties SALH.

Strathcona’s Horse  to return to Canada

The Strathcona’s Horse regiment re-embarked for Canada, via England;

They had the great honor to receive a Colour from King Edward, who also presented them with their medals. 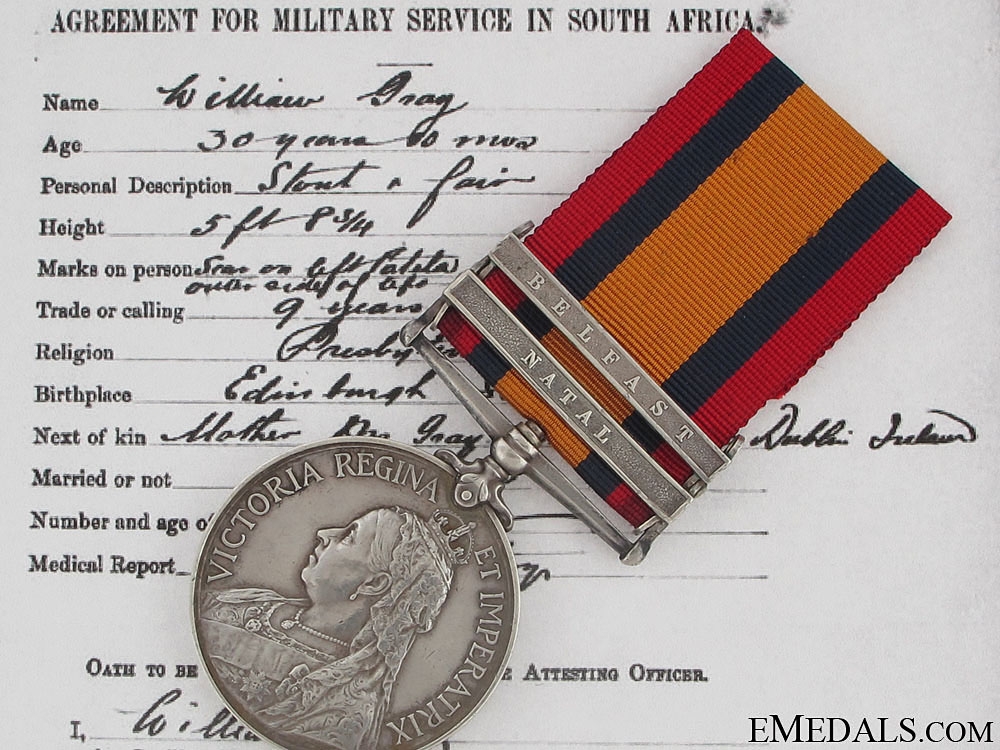