It was a cold winter morning.

It was still dark but the sun is slowly changing the dark shapes outside the hide to trees. The birds are just starting the first overture of the morning bush symphony. 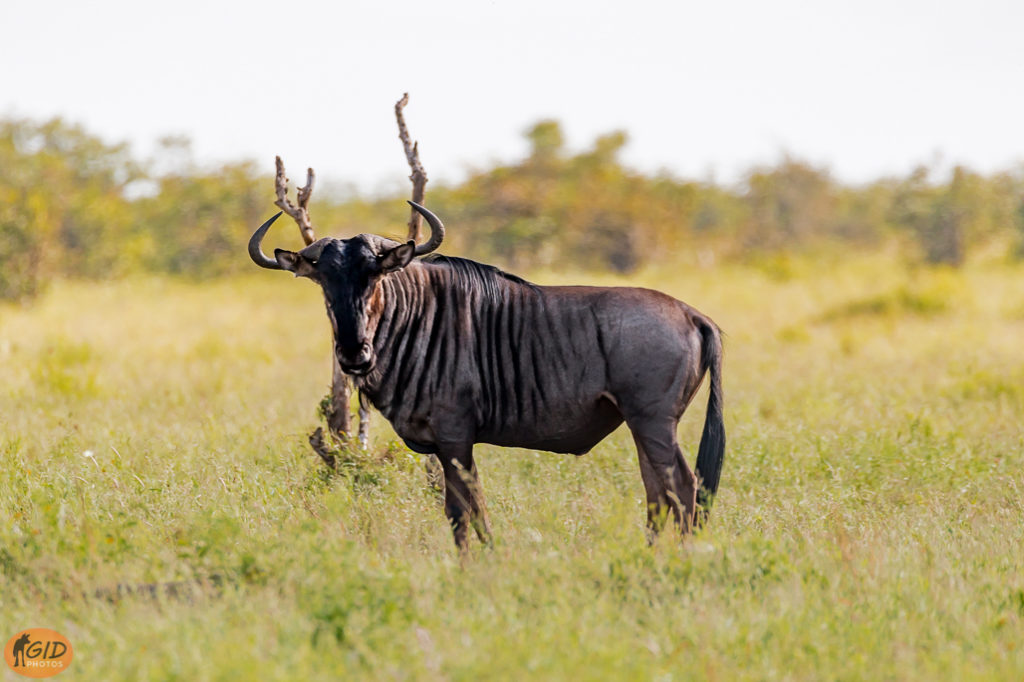 With a cup of warm early coffee and a thick jacket to keep me warm, I am ready for what the day might bring and what the bush is willing to give up.

My main target is a big Blue Wildebeest bull I have been hunting for the last two years. I had game cameras on all the water holes on the concession and the decision was made last night to come to this particular pit blind as the bull has been visiting the water and salt lick regularly the last week.

Blue Wildebeest are found in open and bush-covered savanna in south and east Africa, thriving in areas that are neither too wet nor too arid. They can be found in places that vary from overgrazed areas with dense bush to open woodland floodplains. Wildebeests prefer the bushveld and grasslands of Southern Africa.

Blue Wildebeests can tolerate arid regions, as long as a potable water supply is available. Since all Wildebeests require a long drink every day or two, they must have water within about 15 or 25 kilometers distance. Their blunt muzzles are best equipped for biting short green grasses since a wide incisor row prevents more selective feeding.

Blue Wildebeest are unusually territorial, adult males occupying their territories for a month or for the entire year. The physical size of territories ranges from one to two hectares. The bucks mark territory boundaries with dung heaps, preorbital gland secretions, hoof scent glands of the earth.

I spent yesterday in the same hide as well and the Bull came in with a herd of cows and young animals.

They spend at least 20 minutes around the water and salt but try as I wanted the Bull just did not give me a clear shot opportunity, there was always either a cow standing in front of him or he was facing straight on or when he was standing broadside had another animal right behind him. Not wanting to wound another animal with a pass-through arrow I just had to wait… 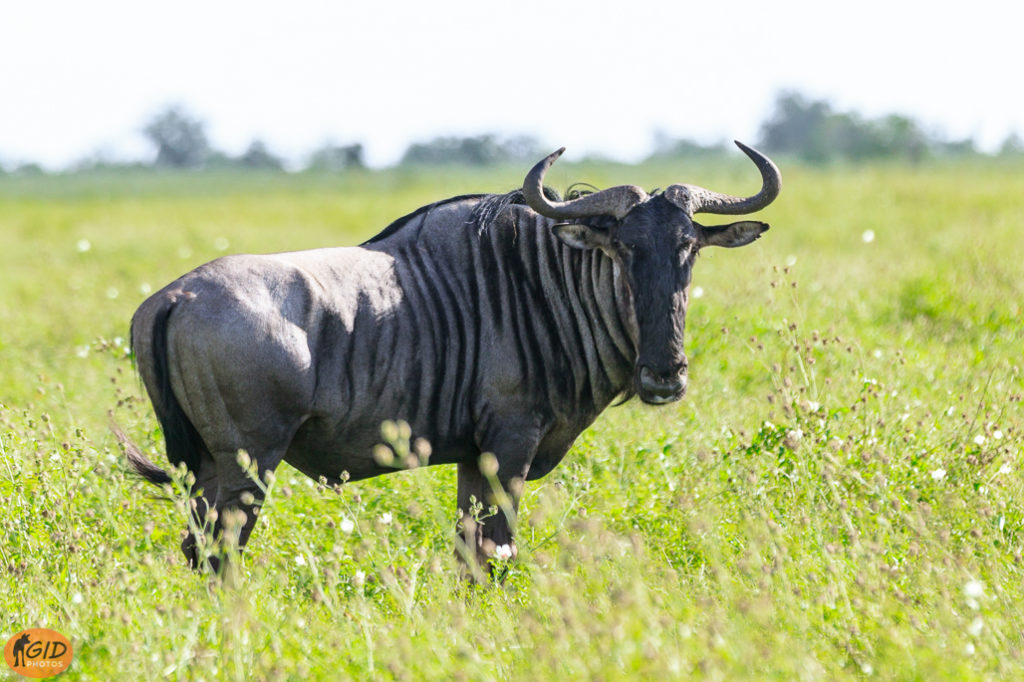 Blue wildebeest are probably some of the ugliest plains game animals in Africa. They do not have the grace of the “Grey Ghost” nor are they as secretive as the Bushbuck or as uniquely marked as the Burchells Zebra. But I love these hunch back clowns of the bush. But with the dark skin, wide horns and thick boss he resembles the Cape Buffalo also in being very tenacious to life and a hard to kill. I know of a couple of Professional Hunters that were injured or had close encounters with these “Poor Man’s Buffalo”

As a Professional Hunter, we have a joke about these Poor Man’s Buffalo.

Blue Wildebeest has a very prominent hump on the shoulders and mane. This makes for difficult shooting. Because the hunter shoots for the middle of the body he may hit the animal to high and with a bullet going over the spine or just touching the spine you are going to have an animal with “his hand brake cable shot off” and a long and difficult job tracking the wounded animal. Most of the times, animals shot too high will recover from the wounds if they are not found.

Even when it comes to bow hunting at bow hunting distances one easily miss judge shot placement. One must remember to allow your shooting angles to compensate for sitting in a pit blind an elevated blind or a tree stand.

An arrow with a total weight of 420gr should be the minimum weight for African, plains game. Heavier arrows allow for better penetration and pass trough of the arrow resulting in a better blood trail.

A bow set between 65 to 70# will deliver more than enough energy to allow an arrow to penetrate deep. A lady or young bow hunter with a 40 to 50# bow will also do the trick on a Blue Wildebeest but then the shooter must ensure to use a heavy arrow something in the region of 550gr and restrict shot to a maximum of 25 yards.

After a slow morning in the hide with just a couple of young impala rams visiting the morning, I started to wonder if the Blue Wildebeest is going to come back to the water today after spending time at the water yesterday. I have long ago learned that perseverance goes a long way when it comes to bow hunting and that once you have moved into a hide or tree stand it is best to stay there the whole day instead of moving from spot to spot. You see more animals you don’t spook animals around the hide and you will get the shot if you have the guts to stay put and wait. 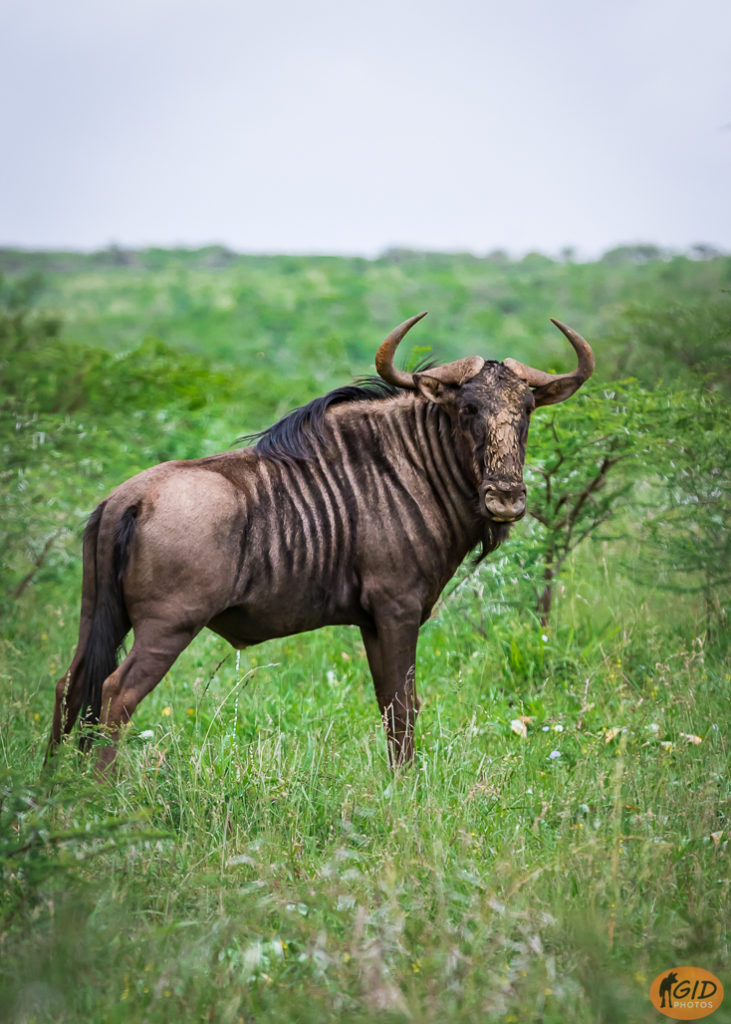 Look how deceptive the thick chest looks on this bull

Just after midday and I am again reading the pocket version of the “Perfect Shot” by Doctari.  One has to be able to visualize the vital area at the different angles the animal might be standing. I still believe the middle of the vital triangle shot is the most effective way to “pull up the hand brake” of any animal. With a top of the hart and double lung shot, no animal is going to go more than 60 to 100 yards. The middle of the vital triangle shot also gives you the biggest target to aim at and should your arrow hit a bit low you have a heart shot with the arrow going a bit high or to the left or right you still have a double lung shot ensuring a quick clean kill.

Another couple of impala came in just after 13:30 and there is a real nice ram with them and I started to wonder if I should not take the impala or do I wait the rest of the afternoon for the Blue Wildebeest….

I decided to gamble on this last afternoon of the hunt and let the impala drink in peace and hopefully work as living decoys. I might get a shot late afternoon at another impala if the wildebeest do not show.

They spend the next 10 minutes around the water drinking and I am frantically scanning the bush for a glimpse of the bull that was with them yesterday, then some of the Wildebeest cows moved about 20 yards from the water and they lay down while the other wildebeest just stand around. Finally 40 minutes after the 1st Wildebeest came to the water I saw the Bull.

With his thick boss and wide spread of the horns he really is a magnificent animal. He walked slowly to the water and by now I had the bow in my hands and my heartbeat like a black smith’s hammer against my chest I waited…

He moved from the water to the salt and he presented me with a 21 yard slightly quartering away shot. I waited for him to settle down on the salt before I drew the 75# Tribute back. The pin started on the opposite front leg moving up until it settled just next to the shoulder in the middle of the vital triangle.

All of a sudden the white fletches on the Carbon Express Maxima hunter arrows disappear on the target and the Wildebeest bull exploded in a death run. I kept quiet and listen to the heard running not knowing why the bull started running.

After 2 years of hunting for this specific bull, everything finally came together and I am sure the bull will not go far. I called the ranch owner on the radio and waited until he stopped next to the hide before climbing out.

We walked to where the bull stood and 30 yards behind where he stood when I took the shot I found the arrow with bright red blood on the white fletching.

We started walking on the running spoor and almost immediately started getting a blood spoor and 50 yards further there he was. The Slick Trick broadhead once again did a great job.

I am now addicted to hunting the Poor Man’s Buffalo and an extra bonus is that the meat makes for very tasty table fare. 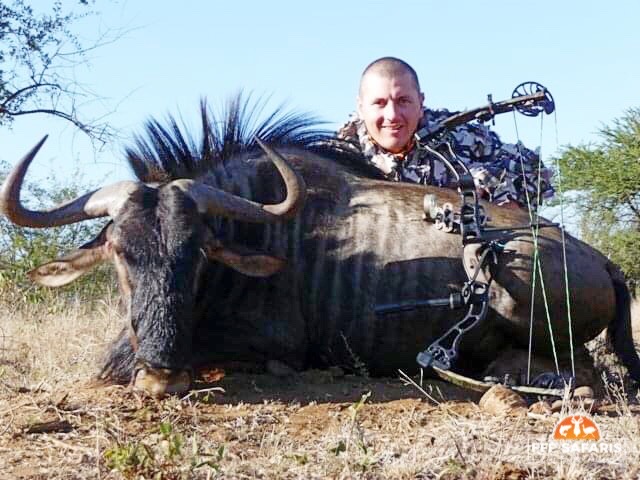